Congratulations to Dr. Preeti Sahu, who successfully defended her thesis entitled, “Fluidization and Segregation in Confluent Models for Biological Tissues” on August 4th! 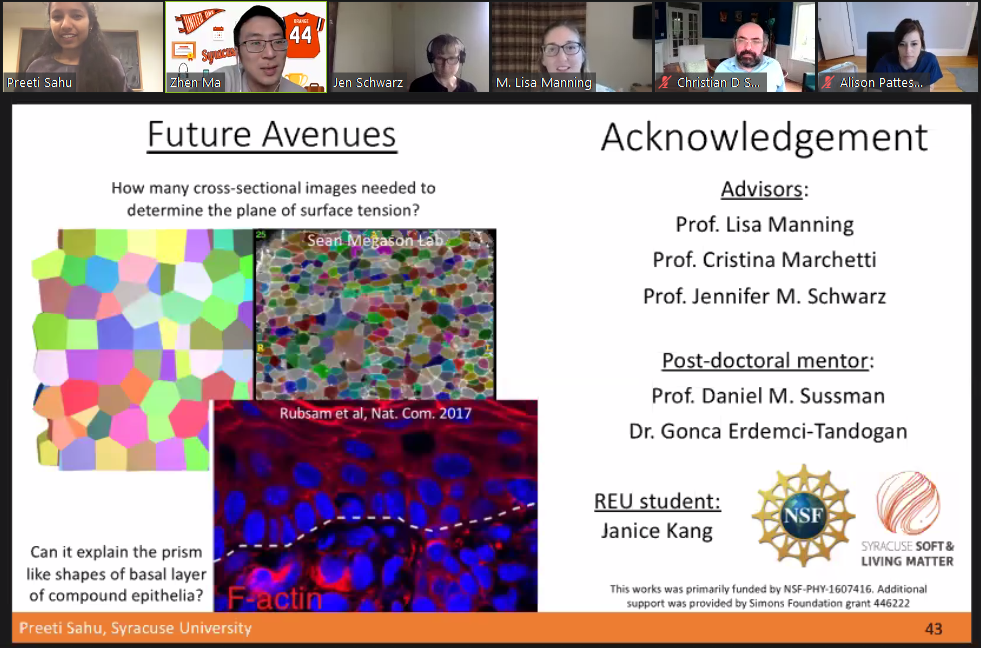 Congratulations to Dr. Ethan Stanifer, who successfully defended his thesis entitled, “Investigating the relationships between disorder, structure, and dynamics in amorphous systems” on June 25th!

As a research lab, we have taken time away from work for #shutdownSTEM and Juneteenth reflect on how we can actively promote anti-racism. We must start by acknowledging that BlackLivesMatter and that systemic racism negatively impacts people of color in many ways, including raising significant barriers that impede them as they perform scientific research and progress in academia.  We love doing science, and all people deserve that thrill of discovery. How many great scientists are we missing because systemic racism blocked them from that path?Moreover, research demonstrates that science and engineering are better when science is more diverse: https://www.pnas.org/content/101/46/16385 . And there are plenty of examples of times when science and technology has failed us because the scientists/designers were not diverse: https://reporter.rit.edu/tech/bigotry-encoded-racial-bias-technology .Given this, we must take active steps to make our research group and society more inclusive, and very specific more inclusive of Black and Brown students and scientists. Small steps include expanding our work on partnerships between Minority Serving Institutions and Primarily White Institutions, contributing to the Physics Department’s Diversity and Inclusion Committee, and advocating for changes to GRE and other departmental testing requirements. We can ensure that the speakers we invite to give seminars are diverse, and we can participate in mentoring and outreach programs.  We can engage in public policy debates as private citizens. This is a process, so we are still engaged in thinking about changes we can make to improve. Please stay tuned.

A great collaboration with Karen Kasza’s group at Columbia has led to a paper we’re excited about that just appeared in Proceedings of the National Academy of Sciences. Our former REU (research experiences for undergraduates) student Leo Sutter is a co-author, as are former postdocs Matthias Merkel and Gonca Erdemci-Tandogan. Here’s a link to a news article about the research : https://thecollege.syr.edu/news-all/news-2020/physics-behind-tissue-growth-embryo/
And here’s a link to the manuscript: Xun Wang*, Matthias Merkel*, Leo B. Sutter*, Gonca Erdemci-Tandogan, M. Lisa Manning, Karen E. Kasza. “A solid-to-fluid transition is predicted by cell shape and alignment in an anisotropic tissue of the developing fly embryo”, Proceedings of the National Academy of Sciences May 2020, 201916418 , https://doi.org/10.1073/pnas.1916418117 , arXiv: https://arxiv.org/abs/2005.07283 (2020).

Former postdoctoral associate Peter Morse, former graduate student Sven Wijtmans, and Lisa Manning worked with Martin Van Hecke’s lab to understand how contact changes correlate with plasticity in jammed soft spheres.  We found that contact changes are not one-to-one with plastic events, even in the limit of zero pressure. This is interesting because in hard spheres those two types of events always occur together.  We also show that the statistics of nonlinear plastic events show the same scaling as the linear response, again highlighting the zero-pressure limit is singular.

Surface tension governed by differential adhesion can drive fluid particle mixtures to sort into separate regions, i.e., demix. Does the same phenomenon occur in confluent biological tissues? We begin to answer this question for epithelial monolayers with a combination of theory via a vertex model and experiments on keratinocyte monolayers. Vertex models are distinct from particle models in that the interactions between the cells are shape-based, as opposed to distance-dependent. We investigate whether a disparity in cell shape or size alone is sufficient to drive demixing in bidisperse vertex model fluid mixtures. Surprisingly, we observe that both types of bidisperse systems robustly mix on large lengthscales. On the other hand, shape disparity generates slight demixing over a few cell diameters, a phenomenon we term micro-demixing. This result can be understood by examining the differential energy barriers for neighbor exchanges (T1 transitions). Experiments with mixtures of wild-type and E-cadherin-deficient keratinocytes on a substrate are consistent with the predicted phenomenon of micro-demixing, which biology may exploit to create subtle patterning. The robustness of mixing at large scales, however, suggests that despite some differences in cell shape and size, progenitor cells can readily mix throughout a developing tissue until acquiring means of recognizing cells of different types.

Our paper, “Linear and nonlinear mechanical responses can be quite different in models for biological tissues” just appeared in Soft Matter.

The fluidity of biological tissues – whether cells can change neighbors and rearrange – is important for their function. In traditional materials, researchers have used linear response functions, such as the shear modulus, to accurately predict whether a material will behave as a fluid. Similarly, in disordered 2D vertex models for confluent biological tissues, the shear modulus becomes zero precisely when the cells can change neighbors and the tissue fluidizes, at a critical value of control parameter s0* = 3.81. However, the ordered ground states of 2D vertex models become linearly unstable at a lower value of control parameter (3.72), suggesting that there may be a decoupling between linear and nonlinear response. We demonstrate that the linear response does not correctly predict the nonlinear behavior in these systems: when the control parameter is between 3.72 and 3.81, cells cannot freely change neighbors even though the shear modulus is zero. These results highlight that the linear response of vertex models should not be expected to generically predict their rheology. We develop a simple geometric ansatz that correctly predicts the nonlinear response, which may serve as a framework for making nonlinear predictions in other vertex-like models.

Our paper, “Glassy dynamics in models of confluent tissue with mitosis and apoptosis” just appeared in Soft Matter.

Recent work on particle-based models of tissues has suggested that any finite rate of cell division and cell death is sufficient to fluidize an epithelial tissue. At the same time, experimental evidence has indicated the existence of glassy dynamics in some epithelial layers despite continued cell cycling. To address this discrepancy, we quantify the role of cell birth and death on glassy states in confluent tissues using simulations of an active vertex model that includes cell motility, cell division, and cell death. Our simulation data is consistent with a simple ansatz in which the rate of cell-life cycling and the rate of relaxation of the tissue in the absence of cell cycling contribute independently and additively to the overall rate of cell motion. Specifically, we find that a glass-like regime with caging behavior indicated by subdiffusive cell displacements can be achieved in systems with sufficiently low rates of cell cycling.

No items, feed is empty.